Recently I have been working on integrating FMOD to arrange footsteps in a 2D platformer. As I already had a sprite with working walking animations I was able to link FMOD to the corresponding animation events. 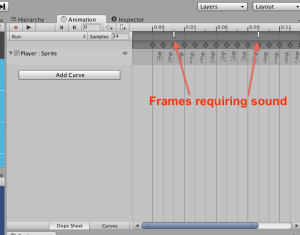 Going into the animation pane, I am able to view which frames require audio. I then create an animation event that links to this script;

After this script is then place onto the character model, animation events on the model can now use this script to call on FMOD. 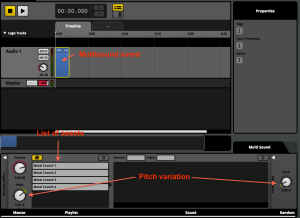 This is an overly simple way of creating an event for footsteps. I am in the progress of writing a new one but it does show a simple technique that can be used for other events. A multisound calls on a group of sound to be played in a random order. These sounds are then modulated using random pitch variations with a degree of 4.08 semitones (bottom right pot) with a maximum of plus 5.50 semitones (bottom left pot). This is intended to reduce the amount of repetition the player experiences. However it is possible the system will randomly pick the same sound at the same pitch over and over. This is why I will design a new more appropriate event for footsteps. This style of event would still be useful for other sounds that are less frequent than footsteps.

Note: Will upload a capture of this in action when I renew my unity pro licence (DAMN YOU CHRISTMAS BROKENESS!!)